Srinivasan College Of Arts And Science
(Affiliated to Bharathidasan University, Tiruchirappalli)
(Recognized by UGC under section 2(f) & 12B of the UGC Act 1956)
( A Unit of Dhanalakshmi Srinivasan Group of Institutions)
Perambalur - 621212

Rotaract Club of SCAS has received

Rotaract is the world’s largest and oldest youth organization spanning over 124 countries and 5 million youth. Rotaract Club of Srinivasan College of Arts and Science, Perambalur was started in 21st January 2008.

Rotaract is a service club for young men and women aged 18 to 30 with around 215,000 members in 9,388 clubs in 176 countries. Rotaract was founded in 1968 by Charlotte North Rotary Club, located in Charlotte, North Carolina. Rotaract clubs are either community or university based, and they are sponsored by a local Rotary club. This makes them true "Partners in Service" and key members of the family of Rotary."Rotaract" stands for "Rotary in Action".

Every Year Students will receive the District Posting from our College

Every Year Installation and Orientation are the default Functions in our Club.

Pets and Sets at July Month 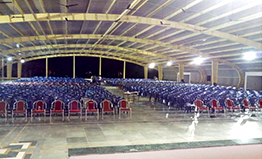 The College has spacious auditorium with well equipped P.A System. It can   Read More

We provide separate Hostel Accommodation for Boys and Girls. The hostel   Read More

The gym is open to all the students. They can use it for their recreation   Read More

We have Indoor and Outdoor Games facilities for playing & coaching chess,   Read More